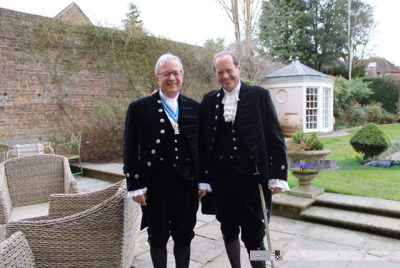 Friday 23rd March 2018 My last act as High Sheriff was to officiate at the transfer of the office to Rhoddy Swire near his home in Ludlow. After an excellent lunch at the Swires in Broad Street, we processed to Palmers Hall, where Lord Justice McFarlane gave a witty and elegant address, following which Rhoddy […]

Thursday 22nd March 2018 At the invitation of the League of Friends of the Royal Shrewsbury Hospital, Veronica and I attended the formal Opening Ceremony for the new MRI scanners at the hospital. We met many of the key staff involved including the head of department who explained that the new scanners will provide much […]

Tuesday 20th March 2018 Telford College kindly hosted the High Sheriff’s Outstanding Young Citizens Award Ceremony in their Sports Hall. As in previous years, we had a very good selection of strong entries. The nominees, a third boys and two third girls, ranged in age from 7 to 19 years old, and nominations covered a […]

Saturday 10th March 2018 At the invitation of the Mayor of Shrewsbury, Cllr Jane Mackenzie, Veronica and I attended the Purple Tie & Tiara Ball held at the Shrewsbury Town Football Club. We greatly enjoyed the evening which was for the benefit of the Mayor’s Charity Fund, a group of charities combatting alcohol and drug […]

Monday 19th March 2018 At the invitation of Christine Holmes JP, my predecessor as High Sheriff, I attended the Performing Arts Centre, Shrewsbury College, to see the “play” put on by Theatre Clwyd for schools in Shropshire so that pupils can appreciate the the consequences of falling foul of the police and the justice system. […]

Thursday 15th March 2018 Veronica and I attended a meeting of the Whittington Brownie Pack in the charge of Tawny Owl Fiona Wilkinson Roberts. I came in uniform and gave a brief talk on the role and history of the High Sheriff. I was delighted that they had heard of Mad Jack Mytton, the first […]

Wednesday 14th March 2018 At the invitation of Mrs Katie Tanner DL, Veronica and I joined the Moreton Hall Business Lunch, which was extremely well attended by members of local businesses and the professions ,and went off beautifully. Xavier Rolet, former CEO of the London Stock Exchange, gave an excellent key note speech. In it […]

Sunday 11th March 2018 Veronica and I attended the Service for the Commonwealth at Shrewsbury Abbey in the presence of the Vice Lord-Lieutenant, Colonel Mark Cuthbert-Brown CBE, DL, and the MP for Shrewsbury and Atcham, Daniel Kawczynski. It was a beautiful service with fine singing from the choir and an inspiring sermon preached by Bishop […]

Thursday 8th March 2018 At the invitation of Andy Goldsmith, Chief Executive of the charity, Veronica and I visited Hope House (https://www.hopehouse.org.uk/home.html), a hospice for children suffering from a fatal illness, based at Morda near Oswestry and also near Conwy in North Wales. It operates across Shropshire, Cheshire and North and Mid Wales. The aim […]

Wednesday 7th March 2018 At the invitation of Superintendent Jason Wells, Veronica and I attended the Shropshire Policing Area Commendations and Awards Evening at the Shirehall, Shrewsbury. There were some 12 commendations to 19 people, including several members of the public. Many of the commendations were for extraordinary acts of bravery or for the successful […]

Monday 5th March 2018 At the invitation of Head Teacher, Mrs Claire Belk, Veronica and I attended an assembly at Bellan House, a pre-prep school in Oswestry, which our own children attended 20 years ago. We were very warmly welcomed by Mrs Belk and her staff, and were delighted to see that the school still […]

Monday 26th February 2018 Veronica and I attended a Remember Veterans Conference arrranged by the charities YSS, Ubique and the Veterans Contact Point. It was hosted by Lady McFarlane DL, Chairman of YSS. This is an extremely important cause as we need to give every support to the Armed Forces, and particularly when they fall […]

Tuesday 27th February 2018 At the invitation of Jason Amyes, Unit Manager of the St John Ambulance Centre in Oswestry, Veronica and I visited the centre to witness an evening training session for cadets. We saw classes teaching first aid and deaf & blind signage, as well as a session devoted to identifying risk. We […]

Tuesday 27th February 2018 At the invitation  Shirley Tart DL, Veronica and I visited the offices of the Shropshire Star in Ketley, where we met Martin Wright, Editor, and received a most informative presentation. We were very interested to see where the main press coverage for Shropshire news originates and were sorry only that the […]

Thursday 22nd February 2018 At the invitation of Mrs Susie Bayliss, Veronica and I attended a meeting with the fitness group that meets regularly at Chetton Village Hall. The meeting was also attended by the Mayor of Bridgnorth, Ron Whittle and his wife Carol. Clearly these fitness groups are an excellent way of combatting rural […]

Thursday 22nd February 2018 At the invitation of Mr James Hervey-Bathurst, who is a trustee of the Severn Valley Railway (SVR), Veronica and I made a visit to the Railway in Bridgnorth where we were met by Nick Paul, the Railway’s Chairman, and Mike Ball, Deputy Chairman. Mike Ball boarded the train with us and […]

Tuesday 20th February 2018 At the invitation of Mrs Charlotte Howard, High Sheriff of Clwyd, Veronica and I accompanied her on a visit to the Blind Veterans Charity in Llandudno. We were received by Mr Paul Wynne-Williams, manager of the home in Llandudno, and Nicky Shaw, Director of Operations (West). They briefed us on the […]

This website uses cookies to improve your experience while you navigate through the website. Out of these, the cookies that are categorized as necessary are stored on your browser as they are essential for the working of basic functionalities of the website. We also use third-party cookies that help us analyze and understand how you use this website. These cookies will be stored in your browser only with your consent. You also have the option to opt-out of these cookies. But opting out of some of these cookies may affect your browsing experience.
Necessary Always Enabled

Any cookies that may not be particularly necessary for the website to function and is used specifically to collect user personal data via analytics, ads, other embedded contents are termed as non-necessary cookies. It is mandatory to procure user consent prior to running these cookies on your website.